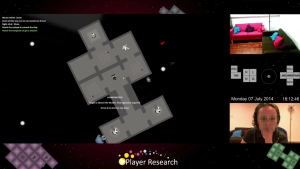 The practice of playtesting is probably the most well-known method of Games User Research. Playtesting is where a representative group of players are observed playing a game and detailed notes on their behaviour, both in and out of the game, are taken and compared against the designers intended behavioural responses. Observations can often be combined with follow up interviews or questionnaires to access data about players motivations, emotions, and thought processes to add additional depth, and help provide context, to the behavioural data.

While playtesting is the best known method, there are other ways to understand players and improve the user experience. These include analytics (tracking player behaviour via data hooks in games), long term engagement diaries (where players report on game play experiences in naturalistic settings via a diary), biometrics (where player physiological data is recorded along with their behavioural and subjective data), User Experience (UX) design, and many others.

With the increase of free-to-play and “games as a service” games and an increased focus on player-centered design, understanding the player and their experiences and psychology has only become more important over time. Finding and removing small issues in the User Experience, particularly if caught early by User Research, can help create a well retaining and engaging game that puts the player at the center of the experience.

Pioneered by Atari in the early 1970s, Games User Research came of age in the 1990s at Sony with titles such as Crash Bandicoot 2, and later at Microsoft Studios in the USA, where Age of Empires was the first game it was successfully applied to. Now there are hundreds of Games User Researchers and User Experience designers working worldwide, particularly at larger studios and publishers like Activision, EA, Epic Games, King, Microsoft, Riot Games, Rovio, Scopely, Sony, and Ubisoft, as well as a number of smaller studios, in addition to several external UX/UR consultancies. Today Games User Research and Experience processes are carried out at all stages of game development, from pre-production all way through to post-release support. Since 2009 the IGDA ‘GURSIG’ group has been instrumental in helping researchers around the world network and share ideas.

The GUR SIG Community at the US GUR Summit 2015

The Games User Research SIG of the IGDA is the games user research professional body, and has held an annual conference in San Francisco every year since 2010, following the foundation of the group in 2009. The first European conference was held in London in 2015. The GURSIG LinkedIn group is comprised of more than 1000 professional researchers, game developers, and academics, all aiming to understand players and help developers create the experiences that they aim to deliver.

To learn more about Games User Research, take a look at the following resources:

Register Now
Interested in learning more about playtesting and player psychology? Register for #gamesUR today!
Recent Tweets
Follow @gamesur
Contact Us
This website uses cookies to improve your experience. We'll assume you're ok with this, but you can opt-out if you wish.Accept Read More